Stand With Sarah For The Climate: Help Fund Her Legal Action Against The NZ Government 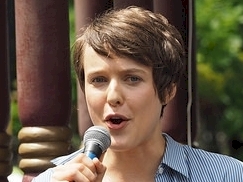 The good news: it appears that, in 2015, carbon dioxide emissions will actually drop – mainly thanks to China’s falling coal consumption.

New Zealanders aren’t taking this lying down, as the great turnout for November’s climate marches in 35 centres around the country showed. While groups like CANA campaign against New Zealand’s worst sources of greenhouse gas emissions, such as Fonterra, law student Sarah Thomson is taking a different approach.

Sarah is launching a judicial review of the New Zealand Government’s completely inadequate emissions reduction targets – and you can help her fund that legal action. A similar action in Holland was successful recently – please donate to ensure the Government can be held to account.